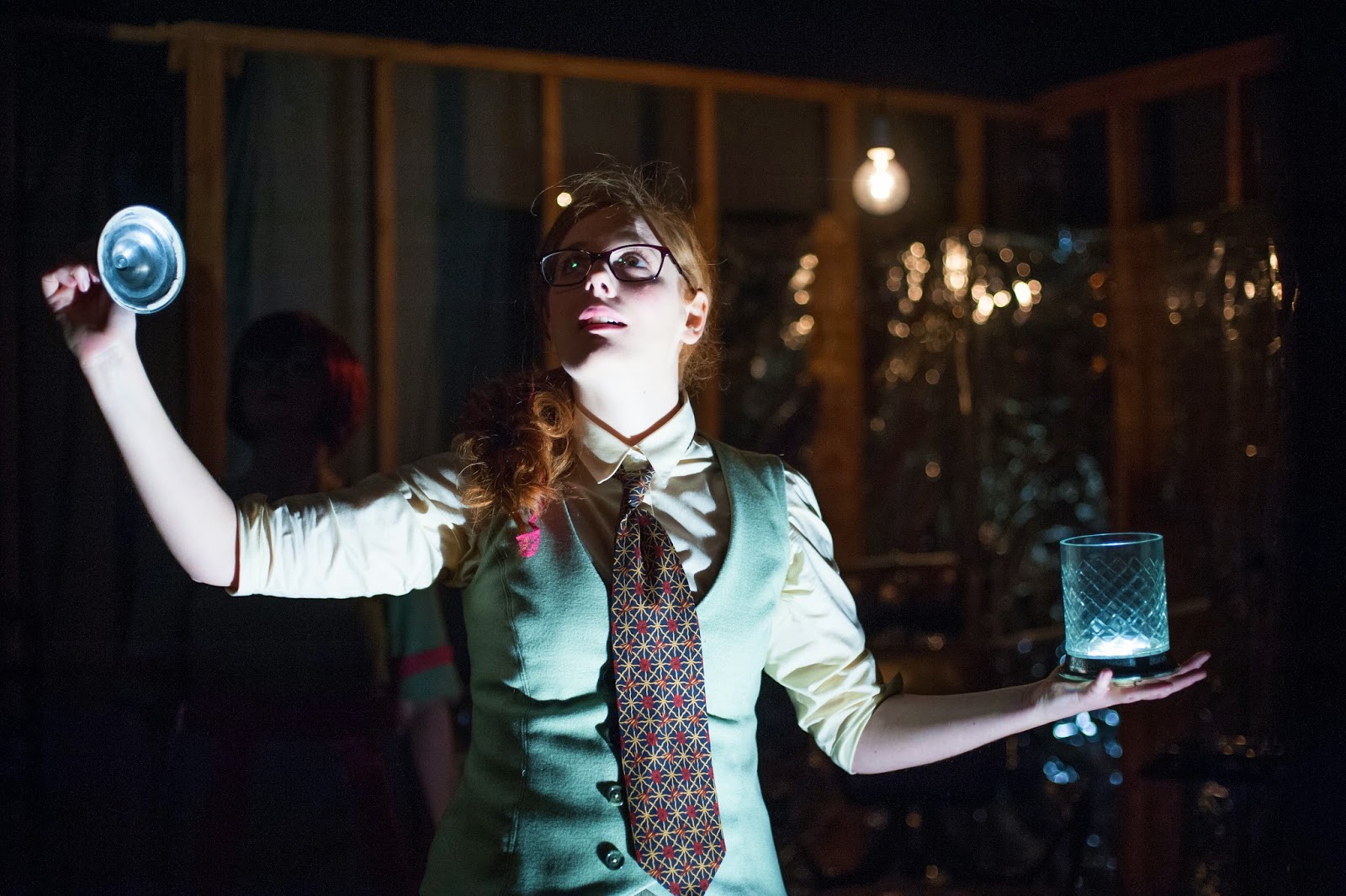 Published in the Guardian
Catherine Wheels at Summerhall, Edinburgh
Five stars
WHAT makes novels such as 1984 and Brave New World so troubling is that you could imagine their plots happening for real. Wouldn’t we all be comforted by having an avuncular Big Brother in our lives? Which of us wouldn’t sign up to a soma holiday in a unified World State? It’s the same with the autocratic Dr Broderick Mackenzie in Catherine Wheels’ superb promenade performance: he’s scary because he is so reasonable.
Played by Ian Cameron, he’s a man you’d be happy to entrust your children to. With his extravagant hair and flamboyant neckerchief, he has a touch of the Willy Wonkas, but mainly, he projects a sense of reassurance. That’s why we willingly follow him into his Mackenzie Institute for the Encouragement of Vocal Harmony, despite having to put on masks and subject ourselves to the decontamination chambers of Karen Tennent’s endlessly inventive set.
It’s also why we go along with him as he describes his scientific method for removing unpleasant sounds from little girls’ voices. We sympathise with him for having oversensitive hearing and admire his laboratory technique for extracting just the right noise. Indeed, we’re quite a long way into Gill Robertson’s production before his daughter Beatrice (an excellent Jenny Hulse) finds the radical voice to tell us something is amiss. The man whose favourite record is the soundtrack to My Fair Lady is a kind of psychopathic Henry Higgins.
But this is no abstract dystopian fantasy. Scripted by Robert Alan Evans, The Voice Thief is a deeply felt cry of outrage at the injustice of female voices being silenced, emotions repressed and personalities muted. Going beyond the production’s sci-fi fun, Beatrice takes a revolutionary step towards emancipation, making it everything a piece of theatre should be: not just funny, tense and alarming, but politically engaged, angry and inspirational.
© Mark Fisher 2014 More coverage at theatreSCOTLAND.comSign up for theatreSCOTLAND updatesSign up for theatreSCOTLAND discussion
Posted by Mark Fisher at 6:30 pm No comments:


WE'RE in the ration-book London of Dylan Thomas, Wyndham Lewis and Francis Bacon. It’s a curious place that swings from bohemian excess to battened-down austerity. Into this wartime world step Robert Colquhoun and Robert MacBryde, graduates of the Glasgow School of Art hell-bent on smashing their way into the establishment – and smashing themselves up in the process.
Slimmed down to an efficient two-hander since its 1992 Royal Court debut, John Byrne’s play is a true-life portrait of two largely forgotten artists who arrived at the GSA a generation before he did. Played by Andy Clark as the talented Colquhoun and Stephen Clyde as the chippy MacBryde, they are a fascinating bundle of contradictions. Irreverent outsiders who yearn for approval, they have an equal passion for creativity and drunken self-destruction. They can switch from cruelty to tenderness within a sentence.
It takes a while for Andy Arnold’s studio production to settle and the scatter-gun gags of Byrne’s script to start hitting their mark, but once they do, the two actors do a gripping job. They are an us-against-the-world unit, a private and professional double act, whose relationship is characterised by mutual support and occasional bouts of jealousy, driven by an infectious combination of ambition and ability.
They are rock’n’roll rebels ahead of their time, who are defeated less by their hedonism than by forces beyond their control. Colquhoun and MacBryde’s era was one of rapid cultural change. One minute they were being feted as the natural successors to Picasso, their angular expressionism seeming bold and modern; the next, they were being eclipsed by Jackson Pollock, whose free-form abstractions made them look as dated as the crooners who came before Elvis. It all makes for a raucous and touching study of two men out of time.
© Mark Fisher 2014 More coverage at theatreSCOTLAND.comSign up for theatreSCOTLAND updatesSign up for theatreSCOTLAND discussion
Posted by Mark Fisher at 2:13 pm No comments: