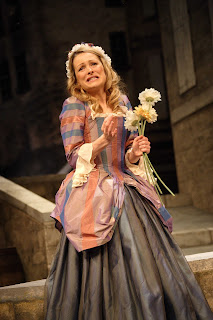 On its debut three years ago, Liz Lochhead's reworking of Molière's L'Ecole des Femmes came across as cheeky, witty and linguistically playful. Theatre Babel's staging, by contrast, seemed laboured; you left the theatre suspecting the play was better than the production. And so it proves in Tony Cownie's vigorous revival, Lochhead's first mainstage outing since being appointed Scotland's makar, or national poet, earlier this year. Educating Agnes is, as we suspected, a daft, boisterous, big-hearted comedy that merrily weaves references to Kinsey and Cosmo on to Molière's 17th-century frame.

Much credit for the transformation goes to Peter Forbes in the lead role of Arnolphe. He is a man so scared of being cuckolded that he cultivates a would-be wife in convent conditions, believing a combination of ignorance and purity will make her too naive to be unfaithful. Like all social engineering, his plan is doomed to fail.

What sets Forbes apart is not only that he essays Lochhead's rhyming couplets with a Shakespearean authority that allows the language to sparkle and the comedy to flow – it is also that he declines to play the character as a monster.

Yes, his scheming is as cynical as any internet groomer; yes, he is a womaniser with blatant double standards; and, yes, he is a pig-headed control freak. As Forbes plays him, though, he is also a genial sort, much given to hearty laughter and seeming like good company. When things are going his way, he is clubbable and generous, guilty of little worse than small-town nepotism.

For all the production's knockabout panto spirit, it means this Arnolphe is more complex than the regulation commedia dell'arte oaf. Faced by the innocent logic of Nicola Roy's passive-aggressive Agnes as she declares her love for Mark Prendergast's swashbuckling Horace, he explodes with the fury of the comic fall-guy. This is just as you would expect – but, at the same time, he exposes a seam of genuine love for the girl. Momentarily, he becomes a tragic figure, a man defeated not by his desire in itself – like all of us, he yearns for affection and stability – but by his headstrong way of achieving it.

The play remains an archetypal romp in which young love triumphs and corrupt old age gets its comeuppance. But for its two happy hours on the stage, Forbes and this strong ensemble make you believe this stock scenario matters. (Pic: Douglas McBride)